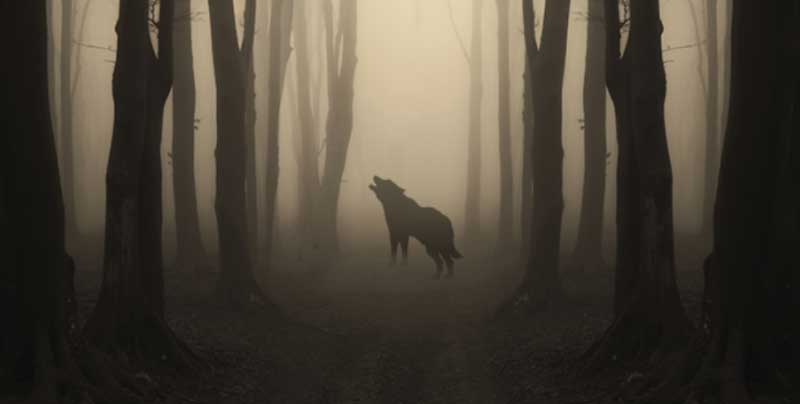 The very first full moon of the year is known in many cultures as the Full Wolf Moon, which is appropriate given the deep, ancient ties between wolves and January’s full moon. For instance, the Gaelic word for January, Faoilleach, comes from the term for wolves, faol-chù, even though wolves haven’t existed in Scotland for centuries. The Saxon word for January is Wulf-monath, or Wolf Month. Meanwhile, the festival of the Japanese wolf god, Ooguchi Magami, is held in January. The Seneca tribe links the wolf so strongly to the moon, they believe that a wolf gave birth to the moon by singing it into the sky. Just why are wolves so strongly associated with January's full moon?

The most obvious answer is because wolves are much louder and more noticeable in January, which is when breeding season begins. Wolves begin to howl more frequently and aggressively to establish their territory, threatening neighbors and enemies alike to stay far away from their breeding grounds. A small pack of wolves may even try to make themselves seem like a larger pack by howling together. While a lone wolf can sustain a howl for the duration of a single breath, an entire pack may howl in unison for longer than two minutes during breeding season.

While it makes sense for the haunting howls of wolves to be more memorable during January, how did wolves come to be associated with the full moon itself? Everyone is familiar with the iconic image of a wolf raising its head and howling at the full moon - but do wolves actually sing to the moon? While that might be a romantic idea, there’s no scientific evidence that links wolves to the lunar cycle. Humans may have begun to associate wolves with the moon simpy because they are nocturnal animals that are very active at night. In addition, wolves do raise their heads in the direction of the sky so their howls can travel over far distances to reach their pack mates as they roam. Instead of singing to the moon, they’re actually singing to their friends.

In fact, wolves are so well-known for their tight-knit communities that the Sioux tribe called January’s full moon the Moon Where Wolves Run Together. The wolf is often seen as a symbol of loyalty and protection in many cultures. The Wolf Moon is the perfect time for you to reach out to loved ones and reaffirm your connections, in preparation for deepening your bonds and taking on new challenges together over the upcoming year.

That said, lone wolves are also entirely capable of overcoming hostile conditions on their own with their resourcefulness. According to Celtic mythology, the wolf is infused with lunar power, which refers to its ability to sniff out hidden insights or knowledge, and to detect unexpected sources of danger. In some legends, the wolf even swallows the sun so the wolf can bask in the moon’s overflowing lunar power! The Full Wolf Moon is a great time for you to plan out clever ways to achieve your goals for the upcoming year. Trust your wolfish instincts when it comes to decisions, but also be tenacious in searching for useful knowledge that will help you realize your masterplan.

Local Date and Time for January 2021 Full Moon in major cities around the world: