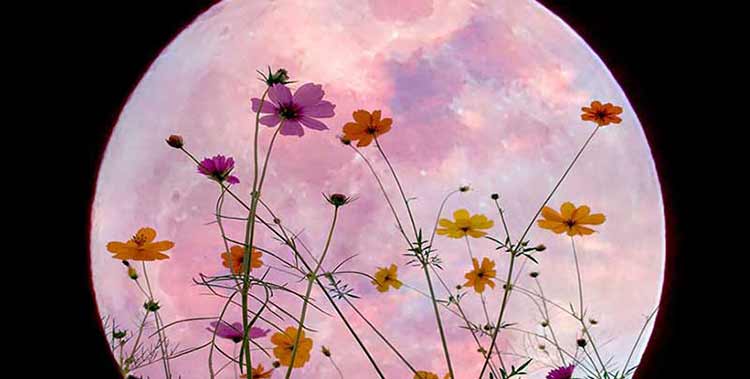 May is most notable for being the turning point in the year where temperatures rise and a vast variety of flowers come into full bloom, letting the world break out into a riot of color. As such, May’s full moon has come to be known as the Full Flower Moon. The Anishnaabe tribe also called it the Blossom Moon. In Northern America, you can expect to see flowers such as bluebells, sundrops, violets, and so on, as well as lush greenery to go with the blossoms. The Apache and Lakota peoples named May’s full moon the Green Leaves Moon, while the Mohawk tribe called it the Big Leaf Moon. But there is one specific plant that’s very important during the May season - and it is, in fact, not a flower.

This plant is corn, an important staple food for Northern American peoples. According to the Algonquin tribes, May’s full moon is the Corn Planting Moon. For Native American tribes, this is the perfect time for them to start preparing the fields for farming and sowing the seeds saved up from last year. Appropriately, the Abenaki culture refers to May’s full moon as the Field Maker Moon, while the Haida tribe calls it the Food Gathering Moon. Apart from corn, other foods such as beans, squash, and potatoes are planted during this time. The Cherokee tribe called May’s full moon the Anisguti Moon, or the Planting Moon, and would traditionally perform a Corn Dance during this period to encourage a fruitful corn harvest.

Due to the rising temperatures, the Full Flower Moon is also a time of heightened fertility. This is a good time for women to bear children in a warm, safe environment that would increase the chance of their survival. That’s why May’s full moon is also named Mother’s Moon, or Milk Moon, which could refer to breastfeeding or to the milking of cows. The latter interpretation is based off the Old English name Rimilcemona, or the Month of Three Milkings, referring to how this was a period where cows could be milked up to three times daily.

In other parts of the world, the Full Flower Moon is better known as Vesak or Buddha Day, the most significant celebration for Buddhists all around the world. On the first full moon of May, Buddhists commemorate the birth, enlightenment, and passing of the Buddha. Devout practitioners are encouraged to renew their intention to adhere to sacred Buddhist principles, as well as refrain from all forms of killing and violence, including eating meat. Celebrations include giving charity to the poor, disabled, and otherwise marginalized groups in society. Depending on your location, you may witness the spectacular practice of releasing thousands of caged birds into the air as a symbolic gesture of liberation, though this tradition is illegal in countries such as Singapore because it may cause harm to local ecosystems.

Pagans, on the other hand, associate the Full Flower Moon with the element of fire, and thus often celebrate it by lighting bonfires and engaging in other magical fire rituals to bring prosperity. Powerful colors for the Full Flower Moon include fiery colors like red, yellow, and orange. This is a good time to tend your garden and let the seeds you’ve planted blossom - both literally and metaphorically. Cultivate your passions and desires, encourage them to burst forth into bloom, and you will be rewarded with abundance in various forms in your life.

Local Date and Time for May 2022 Full Moon in major cities around the world: