The Full Moon for this month will occur in the second week on Saturday, September 10th. The New Moon will happen later in September on Sunday, September 25th. 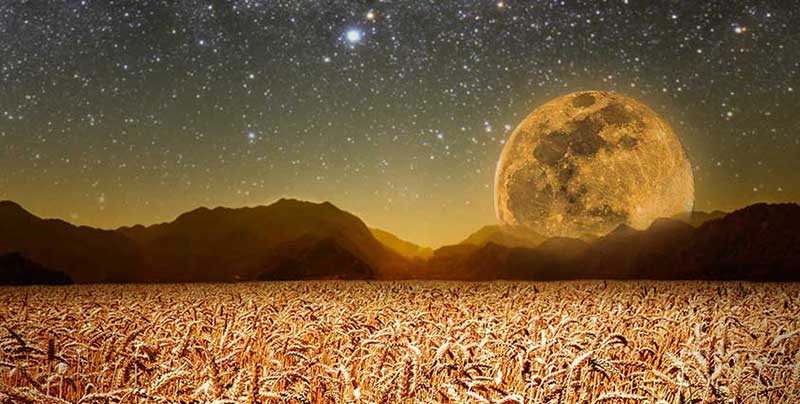 The most widely known tradition associated with the Full Harvest Moon is the Mid-Autumn Festival, celebrated by Chinese communities all around the world. It is also known as the Mooncake Festival. On the full moon night of the eighth lunar month, people gather with friends and family to admire the brilliant full moon while eating mooncakes and drinking tea. Mooncakes are a rich pastry traditionally filled with sweet bean paste or lotus seed paste, and sometimes even include salted egg yolks. The sweet osmanthus flower also blooms during this time, and is often used in teas and the reunion wine drunk when visiting with family. It is a common tradition to celebrate by carrying brightly colored lanterns, so you can often enjoy the beautiful sight of lanterns hanging in front of buildings or in parks, or sky lanterns floating towards the full moon.

There are many other variations on the Mid-Autumn Festival throughout Asia, including Vietnam and other Southeast Asian countries. The Japanese celebrate this full moon with the Tsukimi tradition (which literally means moon-viewing in Japanese), where people prepare offerings to the moon and eat round tsukimi dango, or rice dumplings. In Korea, this full moon is celebrated as Chuseok, which is one of Korea’s most major holidays, similar to Thanksgiving. People travel back to their hometowns for reunions with their family and tend to their ancestors’ graves. Traditional activities include exchanging gifts, playing folk games, drinking rice wine, and eating songpyeon, which is a rice cake shaped like a half-moon.

For most of the cultures that celebrate variants of the Mid-Autumn Festival, the desserts eaten during this festival are made using fruits, nuts, and grains harvested during this season. Similarly, the Full Harvest Moon is called the Nut Moon by the Cherokee tribes, who gather all sorts of nuts to make nut bread, which is eaten during harvest festivals such as the Ripe Corn Festival. During this moon, Native American tribes pay respects to Mother Earth for her generosity in providing food for her children, including corn and other staple foods.

Chinese communities, on the other hand, spend the Mid-Autumn Festival worshipping the Moon Goddess, Chang’e. According to legends about Chang’e, there used to be ten suns in the sky, which caused drought and suffering throughout the land. Houyi, a talented archer, shot down nine of the suns to save the world, and was rewarded with the position of emperor. Unfortuantely, he later became a malevolent tyrant, obsessed with the search for an immortality pill. In order to protect the common folk from being ruled over forever by a cruel emperor, his wife Chang’e stole the elixir of immortality from him during the full moon of the eighth lunar month. Enraged, Houyi chased after Chang’e, who swallowed the elixir to prevent Houyi from taking it. As a result, Chang’e became a deity herself and flew away to the moon, where she lives in a Moon Palace with her companion the Jade Rabbit, who pounds herbs in a pestle to help her create the elixir of immortality. Appropriately, the Chinese Lunar Exploration Program is named after Chang’e.

Local Date and Time for September 2022 Full Moon in major cities around the world: